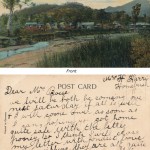 The background to the postcards

Alice Boese was the sister of my great-grandmother Annie O’Neill (nee Lowery).  She was married to Rudolph Boese who, amongst other occupations, was the blacksmith at Farleigh for many years.  Violet, their youngest daughter, married Patrick Coogan and they too lived in the Farleigh area before moving to Brisbane.  Tom Coogan, the son of Violet and Paddy, has an album which is full of the most wonderful postcards sent to Alice and Violet over many years.  Some postcards have also been sent to others but were given to Violet to paint as she was a gifted artist and would paint the postcard. I have decided to put some of the postcards on the blog and hope that readers will be able to add to the stories which I have attached to them. I have undertaken some research for these stories to see what links (other than friendship) there may be between the families.  Some of the names are easy to find, others have required much more investigation.

Link to larger image of the postcard

This first postcard is one of the latter. I am hoping that someone will recognise the family or writing on the card and be able to add to what I have written. This postcard does not have a date. Mount Carbine is a small mining town to the north west of Cairns. The card is from Mrs H Harris at Homebush so my research concentrated on that name.

Henry Harris is on the 1895 electoral roll living at Louisa Estate, Mackay. I can’t find this place but by 1900 he is listed at Homebush. On the 1903 electoral roll, living at Motello Farm at Homebush are Emily and Henry Harris. In 1904, Henry took 6 shares in the Northern Farmers’ Agency Ltd, an organisation for carrying on the business of dealers, store keepers, importers and commission agents.  Other shareholders included Nils Petersen, Christian Petersen and Frank Stearns all of Homebush.  Christian Mau was the Secretary and the office was registered at Six-Mile, Homebush, near Mackay. In 1910, Henry Harris sued Thomas Ryan, both of Homebush for £40 damages to a crop of cane. In November of 1913, fires were deliberately lit on widely divergent portions of Harris’ farm, even on a farm he owned across the other side of Sandy Creek. About 900-1000 tons of cane was burnt but the mill managed to take most of it. In 1919, Henry Harris is still living at Homebush and is a farmer.

According to family trees on Ancestry, Henry Harris was married to Emma Rice.  Some family trees have her dying before 1889 but this is not correct as the QLD BDM index has her bearing a child in 1904. Others have her dying in 1920. How did Mrs Harris and Mrs Boese know each other?  Alice’s husband was Danish and there were a number of farmers in the Homebush area who were Danish so is this the link?