↓
Home→Places→Homebush – glimpses of the past 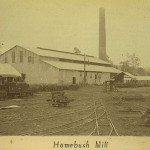 Homebush was once a large and thriving community in the environs of Mackay. The Queensland Post Office Directory for 1893 describes Homebush as an “agricultural township, situated 15 miles SW of Mackay and 8 miles from the Eton railway station. Population about 450 white and 400 black.” In the 1860s and 1870s, the Cape Palmerston and Homebush runs were consolidated and selectors took up land to graze sheep and cattle. John Walker was one of the early pioneers who took up selections but died in 1879 not long after his purchase.  That same year, the mail run was done once a week by horse, via Clairview, Porphyry Hills, West Hill, Kelvin Grove, Plain Creek, Clifton, Homebush, Bagley’s and Walkerston for the sum of £135.

In 1881, the CSR Company acquired 8000 acres in the area as an estate to grow cane and in 1882 and 1883 built a sugar mill at Homebush. The first South Sea Islanders indentured to work in  the mill arrived in January of 1882,  a contingent of 50. Later Cingalese labour was also imported but found to be not suitable.  The next to arrive were the Javanese in 1885 who were under contract for three years. By 1884 the Homebush Mill was considered to be the showpiece of the sugar mills in the region.

A brick making business was established and mill houses were built in the township and soon a post office, general store, butchery, police station, racecourse as well as the General Gordon Hotel were constructed. The hotel was built in 1886 as a single storey building with the second storey added after the 1918 cyclone. A large hall was erected along the side of the hotel and was used by locals for wedding receptions and dances. By 1897, Homebush even had its own band which played for the Jubilee celebrations in Mackay that year.

With the growth of the area, came the applications to build a school beginning in 1881.  A Building Committee was established in that year with Mr Frank Stevens as Secretary. The Committee had to raise one fifth of the cost of the school building and teacher’s residence. It took another 8 years before the Homebush State School opened on the 24th June 1889,  with an enrolment of 33 pupils, under Head Teacher, Mr John Croston. The successful tenderer was Mr Mackintyre who built the school for the sum of £700. The first members of the Homebush School Committee were J. W. Christenson, F. Culverhouse, J. G. Hess, N. Petersen, and F. J. Stevens. The 1918 cyclone severely damaged the mill and repairs were costly. By 1920, CSR was regularly losing money on the mill and in 1921, following the season, the mill was closed. Cane from Homebush was then sent to Farleigh Mill but this was later changed to Racecourse Mill. The township closed down slowly over the next few decades as better roads were built to Mackay and transport became more efficient.  The school and the General Gordon Hotel are still operating.